From Ministry of Truth Civil Resources

This page is Out Of Character.
You have ventured out of the RP world and back to reality.

Our role-play dives into the theme of 1984 a book by George Orwell written only a few years after World War II. When we originally chose this theme we had no idea that the current world events would unfold the way they do. This server & community are definitely a satire on unchecked government power and the cost of loosing individual freedom.

A major benefit to 1984 lore over other potential lores is that being fictional it is hard translate to real life to real life stigmas. Whereas some brands of role-play could label someone a Nazi, Community, Racist among other things, 1984RP is fictional to include the nations, backgrounds and political ideologies and does not carry any taboo stigmas that take away from the fun of the game. After all the point of this is to have fun and not deal with the petty dramas of the real world.

Where You Stand As a Player

As a new player or member of the INGSOC society that is created on the OrwellRP server, you start out as an unemployed prole. It is up to you to go from there and show your worth to the party by acquiring a job and contributing to society. Just because you are originally assigned the class of prole does not limit you, proles have tremendous opportunity to achieve wealth and success in Oceania even if they choose to not climb the party ladder.

Some basic things when starting out to be mindful of :

The book Nineteen Eighty-Four is set in Oceania, one of three inter-continental superstates that divided the world after a global war.

After the Second World War the United Kingdom became involved in a war during the early 1950s in which nuclear weapons destroyed hundreds of cities in Europe, western Russia and North America. London like many major cities suffered widespread aerial raids. Britain fell into civil war, with street fighting in London, before the English Socialist Party, abbreviated as INGSOC, emerged victorious and formed a totalitarian government in Britain. The former Commonwealth Nations, Latin America and the United States were absorbed, resulting in the superstate of Oceania. INGSOC became the sole government party in this new nation.

Simultaneously, the Soviet Union conquered continental Europe and established the second superstate of Eurasia, under a Neo-Bolshevik regime. The third superstate of Eastasia emerged in the Far East after another decade of fighting, with a ruling ideology translated from Chinese as 'Death-Worship' or 'Obliteration of the Self'. The three superstates wage perpetual war for the remaining unconquered lands of the world in "a rough quadrilateral with its corners at Tangier, Brazzaville, Darwin, and Hong Kong" through constantly shifting alliances. Although each of the three states are said to have sufficient natural resources, the war continues in order to maintain ideological control over the people. 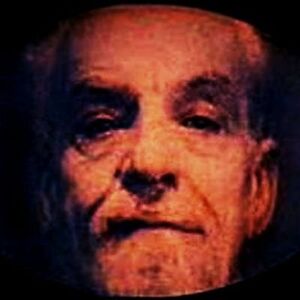 An image of the man behind all that plagues the world, Goldstein.

While citizens in each state are trained to despise the ideologies of the other two as uncivilized and barbarous; Goldstein's book, The Theory and Practice of Oligarchical Collectivism, explains that in fact the superstates' ideologies are practically identical and that the public's ignorance of this fact is imperative so that they might continue believing otherwise. The only references to the world outside of Oceania for citizens (the Outer Party and the Proles) are Ministry of Truth maps and propaganda to ensure their belief in "the war".

However, due to the fact that most people barely remember these events and due to the Party's manipulation of historical records, the continuity and accuracy of these events are unclear. Citizens note that the Party has claimed credit for inventing helicopters, airplanes and trains, while some degenerates theorize that the perpetual bombing of London and other major cities is merely a false-flag operation designed to convince the populace that a war is occurring. If the official account was accurate.

The capital is known as Airstrip One, the Oceanic province that "had once been called England or Britain". Posters of the Party leader, Big Brother, bearing the caption "BIG BROTHER IS WATCHING YOU", dominate the city (Winston states it can be found on nearly every house), while the ubiquitous telescreen (transceiving television set) monitors the private and public lives of the party members. Military parades, propaganda films, and public executions are said to be commonplace.

There are three levels of class in Oceania they are:

(I) the upper-class Inner Party, the elite ruling minority, who make up 2% of the population.

(II) the middle-class Outer Party, who make up 13% of the population.

(III) the lower-class Proletariat, who make up 85% of the population and represent the uneducated working class.